You now understand what they tried to explain. You’re not in Maxim’s garage, but in the moto-club. A large room of 150 m² which is the gathering place of the “Black Bears” of Irkutsk. A place proudly decorated by dozens of objects, often related to Harley Davidson.
Maxim offers you to leave your bags, and go with them to a sauna. You’re exhausted, but the idea is appealing. You sweating a lot, and remember the benefits of sauna.
So you go together. Harleys backfire almost as much as your motorcycle. Driving is easy. You’re surprised to rediscover your bike lighter.
The sauna is in an old building dating back to the Soviet time. It can be belonged to a union, and the decorations are all in the Soviet style. We’ll explain that the group rents weekly for a few hours the place. Sauna, reception, changing rooms .. Other riders have joined you and you are between 6 or 8 outfits are neat, always in the dark biker style “Harley.” A style to fear as we all look so kind…
After the sauna, all meet in the garage which is also your room during your stay in Irkutsk. We will explain how the place. You’re exhausted and dost not lie down in your sleeping bag. Discussions continue, but you will hear more.

You wake up at 10 o’clock. It must be years since you had not slept so much.
You should not have your tires before Monday. Enjoy with you to start your checking. You first unpack and inflate the boat. You were afraid that the vibrations have caused fatal friction, but it is not. As the bag has suffered, as the boat is impeccable. Good news: carrying a boat on a motorcycle without damaging it did not seem you win in advance.

You also are looking to repair your horn, and for the cause of the error on the air sensor. A priori, the problem seems related to the oil used in the foam air filter. When you bought the bike, you asked the dealer to replace the paper filter with a foam filter that must be wet of oil. There was probably too much oil. You find small puddles at the bottom of the air box. You clean them, and also clean your filter that needed it.
For the horn, you do not understand and you give up. An accessory that you rarely use. You do not have actually need.
Upon inspection, you realize that you lost the cap of the rear brake. It must have happened shortly before your arrival as there is still a quarter of a liquid rather clean. You do not hope to find a cap that matches, but you will have to find a solution.
Noon, Bob comes back to you. He invites you to a fancy restaurant downtown. The food is refined, delicious. Bob speaks very good English, and he tries to help you by all means at its disposal. For your worries with your Visa card, he wants to give you money, but you do not need it. It makes you see the city. You’re sitting in the back of his Harley, and you’ll benefit from the visit, while music. 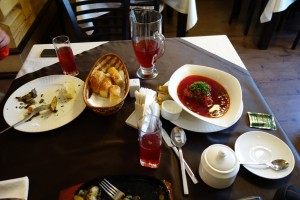 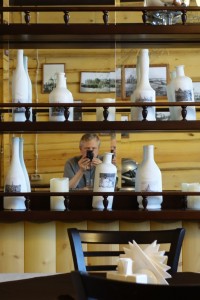 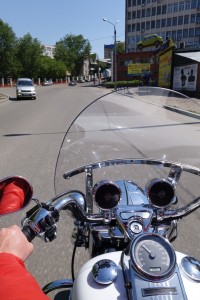 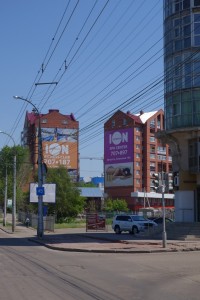 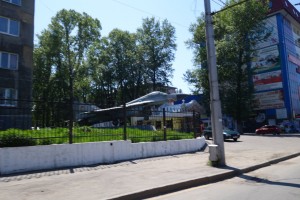 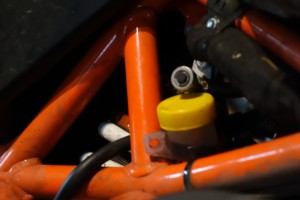 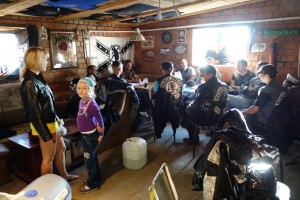 Bob pick you up for some shopping. You’re still sitting on the back of his Harley. A mere 5 minutes after leaving the garage, you get stopped by the police. Bob is neither drunk nor thief motorcycle. It should not be a concern. Except he does not have a driving license for motorcycles. Often, the police let him leave. But this time an officer is present, and it must be verbalized. Bob explains you that half of the members of the club drive without a license. Bob has two motorcycles. He drive them for 5 years, and was fined only twice. You’re surprised.
As you have your license, police ask first what you leave as conductor. Why not, but you never rode such a motorcycle. You make a few meters in search of balance and neutral, and the officer understands that it is more prudent than it is Bob who resumes the handlebars. Very pragmatic these officers.
The first purchases are going well. You recover money from a Western Union office, buy a map of Russia from Garmin for your GPS, and you find in an armory some small rockets to scare bears. You were looking for a big pepper spray as they sell in Canada or the United States, but here it is unknown: they scared the bears with the noise, or a firearm. The seller makes you a demonstration of the rocket. You’re convinced, and it will take less space than the pepper spray.
You’ve got to find your spring pins for your propeller shaft. Foolishly, you didn’t buy these spare parts thinking that you can find them easily on the road. You thought it was a universal object such as a ball bearing, you’d find anywhere. There is nothing. You make many shops, but each time, the seller seems to discover what a spring pin is.
These pins are used to attach the pulley on your propeller shaft. You know they crash quickly, they do not last. Whether you need replacement parts. Especially since you got your boat planing. You can not consider navigate over long distances without these parts.
Bob thinks he should wait until Monday, and that will be found without difficulty. You go to the garage. Maxim awaits you with your tires and oil you thought recovering by Monday.
There are many people in the garage this Saturday evening. A club meeting. Maxim came with Diana, his daughter. She plays in the boat, imagining the ocean. All club members leather clothing, impressive looks. But you quickly realize they are not at all antisocial. They have a job, a family, children, and their membership in the club, their commitment to Harleys is mostly a hobby. Also wish to belong to a fraternal group.
Everyone wants to help you. One of them that takes all the caps to try on your brake tank. Finally he finds one that seems to fit: that of sunflower oil bottle. Indeed, it is not screwed because not do not match, but pressing strongly, we manage to snap reliably. Why not … In any case, it will be a good temporary solution.
In the evening newcomers. First two bikers remain sleep that night in the garage. They just spent a month in the United States where they bought their Harleys. They come from the port of Vladivostok and return home in the Moscow region. They tell their North American tour. Their encounters with immigrants, former “Soviet”, their life, their jobs. The audience is attentive. One of them is fluent in English, and translates what said.
You also have the visit of Julia and her husband Dima. Julia was English teacher. Dima tries to learn English under the authority of Julia. They invite you to dinner. You go on foot, in a pizzeria. They will also offer to go to Lake Baikal in the morning, and you agree. Now that your tires are there, you have work, but you accept. It’s nice sharing time with your new friends. 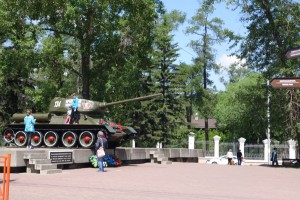 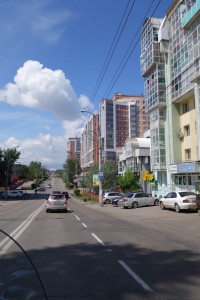 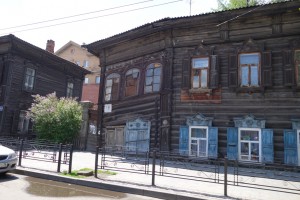 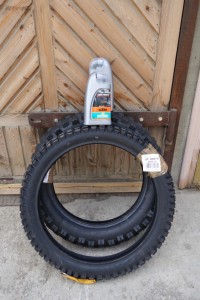 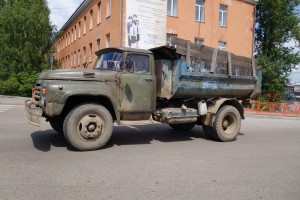 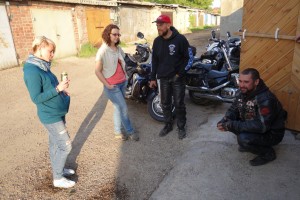 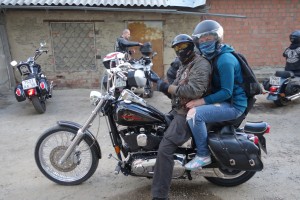 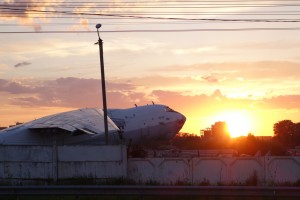 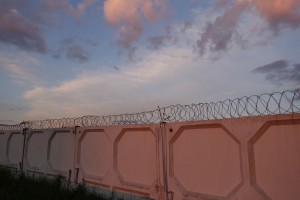 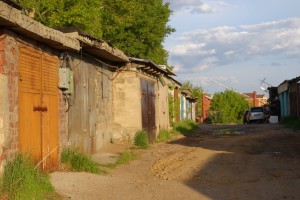 You take your breakfast in the company of your companions from Moscow. You tell stories of travelers. They will also talk about the Ukraine. Like most Russians you meet, they have family in the eastern part of Ukraine. For them, the Ukraine is historically Russian. The message is often the same: Russia is constructed from Ukraine. It is its historical heart.
You getting close to their position. You might object that when the wish to become independent Chechnya, Russia sends tanks. If the Buryats wanted to become Mongols, Moscow will stifle their claim. It is the same for many minorities. You dare not expand the subject.
Republics borders of the former USSR borders were drawn by Stalin, often without historical logic or human logic. You had met and Uzbeks in all countries bordering Uzbekistan. Stalin shrinked Uzbekistan. Ukraine is talking about it because it is on the border of two blocks, but many other countries could also face some problems.
Julia and Dima arrive to pick you up, direction to Baïkal. You say bye to your friends who will head to Moscow.

Lake Baikal is less than an hour from Irkutsk. You left early because the road might be charged in the afternoon.
The lake is calm, perfectly flat. You think your trials … an ideal place.
You do know Baikal as the “largest freshwater reservoir in the world.” It is for the Russians a resort, but still a bit chilly. Even in the summer the water is too cold for swimming. The main activity seems to be eating smoked fish. You try.
You talk about Australia. Julia and Dima will go there in September for their holidays. Everyone also talks about his work: Dima is in the computer, and Julia is a television journalist. They are young, they have many projects. They love to travel, above all on their bike, and are not particularly attached to their region: winter is too long for bikers!
They leave you at the garage in the middle of the afternoon after spending time in vain search for your spring pins. You finish the installation of your tires, preparations of the bike. You hope to hit the road tomorrow afternoon.
You can also get some time for your blog. Since you left, you’re always late in your writing. You’re too busy. 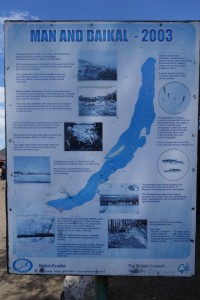 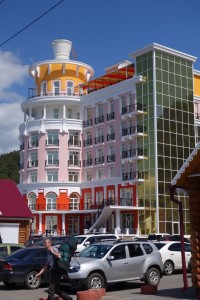 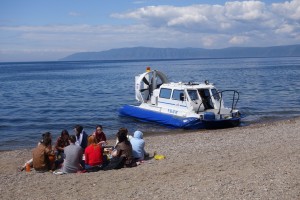 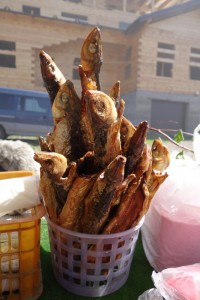 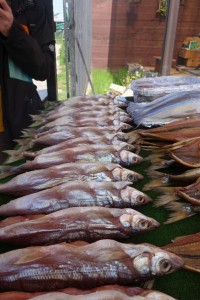 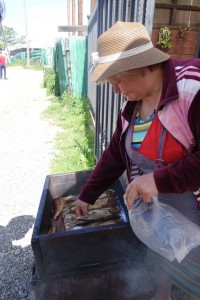 Bob gets you to go again in search of spring pins. It will be as unsuccessful in previous attempts. First, you make a series of shops selling all boat engines, inflatable boats, Chinese motorcycles, bicycles and car batteries. The mixture is particular, but all these stores offer the same. You explain to Bob that you should find a shop for generic mechanical parts. There are few if not the sellers of detached car parts. But the few that might interest you, who sell fasteners, mechanical parts including pins, do not know the spring pins.
Since your arrival in Russia, you see factories rarely. Buildings that look like plants are often abandoned. It is the same along the roads of former kolkhozes. Russia is no longer a country of production. Except perhaps for weapons and raw materials.
In a workshop where motorcycles are prepared, you think to ask if they do not have tanks brake spares. They are looking for, but don’t find any. Finally, they dismount one from a new Chinese bike, and offer it to you. Russia is generous. Bob told you it would be the same in all countries of the world. You do not agree. If a Russian biker needs a brake tank in France, they will be offered to order, to pay and wait.
However, the search is still unsuccessful for spring pins. Back to the garage, you will resolve to ask friends French if they can send you from France, or if any other solutions exist. You quickly have complete answers, detailed. Your concern pins does not seem surprising. These parts are not really made to transmit torque. They are doing to lock assembly. They suggest you alternatives, but it is too late to implement them. You should have work on this earlier. Now, you need enough pins for the trip. You will check them regularly and you will replace them when you find them too weak.
So you ask a friend to ship some to you by DHL. With a little luck, they will be Yakutsk same time as you.