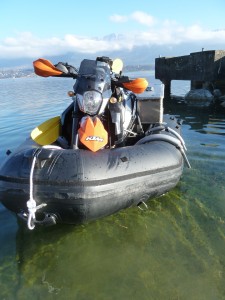 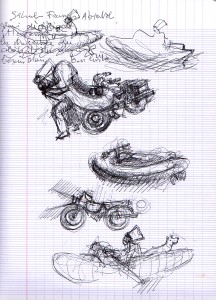 If you want to be independent, you will need to carry a boat which is small enough to be transported by bike and big enough to support the load of the bike when navigating the strait. You have found that a 3 meter inflatable boat bears a load of 500kg for a weight of only 30kg. That could work! 30 kg is less than a passenger.
Now, the issue is the engine. The weight of an 10 HP outboard engine is typically 40 kg. Quite a heavy load to add on the bike. But a good, reliable, powerful engine is already available on the bike. Why not using it ?

To avoid carrying a specific engine for the water crossings, you have designed a light system which connects the shaft of the bike to the propeller. This system consists of: 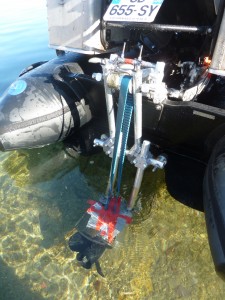 For an extra load of 15 kg, the system powers a propeller designed for a 20 hp outboard engine. The overall mechanism is packable in the panniers of the bike when travelling on the road, and the folded boat can be placed over the rear rack.

You have worked on this project with some students and their teacher of the Grenoble University (IUT-GMP). The first successful trials were done in May 2013 on the Bourget Lake. Since, you are working on optimizations of the system to reduce the weight and to increase the reliability. 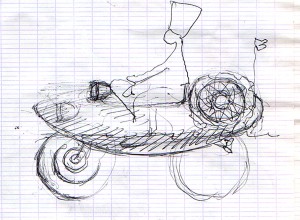