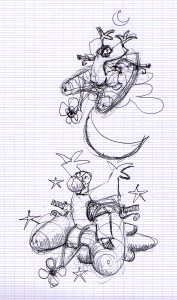 In a recent conversation with a fellow biker (who you met in Chile on your last trip) the challenge of crossing the Bering Strait was discussed. On some maps, the Bering Strait is represented in its entirety. But, on most others, it is divided and displayed on either side of the map. The first depiction gives the viewer the impression that the Strait is small – more like an isthmus than a strait. We wondered whether the idea of crossing the strait in winter (when it is frozen) would be possible with our bikes. You have studied this possibility and concluded that it would not be possible. In winter, the central path presents that many dangers and obstacles.

However, in summer, there is 80 kilometers of water to cross!

The ability to cross oceans is not a modern age achievement. Primitive humans were able to explore the continents and they used neither ferry boat or plane. They, like many other mammals, crossed the straits to occupy most of the islands of the Mediterranean Sea, Asia and Oceania. A long time before the discovery by Christopher Columbus, humans had settled in the Americas.

Excluding the polar regions like Antarctica, 99% of the lands of the world have been inhabited for hundreds of thousands of years. This was possible because the humans discovered how to cross a 100km strait.

Most straits are narrow:

By crossing the continents over the lands and over the straits — you could go almost anywhere!