Still rain and the total flatness. You understand why Pascale and Michel had bothered on this road. Go through the south, Iran and Central Asia is much more interesting, so much more varied. So much richer.
You try to have a break every two hours. You’re tired, and lack of flexibility in your position that you quickly sore buttocks. You lack space. On the dirt, you’ll have to draw back the boat, even if it amplifies the imbalance. Otherwise, you will not succeed to drive. But on paved roads, you estimate that it is better to concentrate the weight to reduce the effect of shocks.
You begin to cross bikers. Three or four times a days. Greet you every time. Near a bus stop, 4 BMW stopped. GS1100. You recognize on the German plates. You stop and you discuss your travel. You show them the video that explains your concept. They have fun.
You leave together. At the approach of Kemerovo, they turn, the direction of Marinsk. Until then, you followed the signs to Krasnoyarsk. You greet them and continue. Error: Marinsk is on the road to Krasnoyarsk and Kemerovo is a big city, even if you had never heard its name. Congestion. A thunderstorm. Cars splashed you. You feel dirty. Your visor becomes opaque. You ask your way to drivers, and you’re well informed every time. Once you’re wrong again, find yourself on a small road. You ask a man who is waiting for a bus. He is drunk. Are you German? No, French. It tells you a road. You’re worried that the road depends on your nationality. You want to leave, but he tries to block you. You try the horn, but you realize that it no longer works. You already had the opportunity to try to honk without success, but you thought you pressed the wrong place. It is really “out of service”. You rales and forces the passage again. Alcohol is a concern in Russia.
Last week in a petrol station, a drunken man wanted to kiss you on the mouth. There was nothing aggressive, but …
You finally leave the city. The good weather returns, you dry, but you stay dirty. The bag of the boat is also well stained.
In the evening, you stop at the first hotel. You ask if there is a garage, a little security. The owner of the hotel is somewhat reassured to your bike, and advises you to restart. 50 km away, a hotel with secure parking. From Omsk, you have the impression that insecurity is a concern on this road. Often guards in petrol stations. Many times cars with open bonnets and men who are great signs for the vehicles stop. The cars do not stop, and neither you do. Not only should you an hour to get out and storing tools, but these situations feel the scam.
So you join the next hotel. Are you ashamed of your boat up in the hotel room. The floor is plastic and you hope it will not remain a trace.
Every time you explain your journey to people you meet at these hotels. You think they’re happy to hear such a project. Whenever the word “Chukotka” impresses. A bit like if you said “Adelie Land” in France. Chukotka is fully isolated from Russia.
You eat with a driver from Yakutsk. A gentle man, Asian style. He spends his time riding in a small Toyota pickup between Moscow and Yakutsk. May be 8000 km. You made him repeat: Moscow – Yakutsk, Yakutsk – Moscow, Moscow – Yakutsk … vrouuum vrouuum. He is smiling: Da vrooumm vroooummm!
It tells you that the road to Magadan is very difficult. You know … You’ll see.

You bypassed Krasnoyarsk. Gradually, the landscape has changed. A little relief, turns, and less water. You may even see flowers on down the road. Dandelions, but flowers anyway. And mosquitoes are rare.
Nice small villages. Old wooden houses with carved and colored shutters. Often woodpile outside the house. Summer does not happen they are already preparing for next winter.
Sometimes an abandoned factory in the village. You recognize a small mill. Also the ruines of former Soviet collective farms.
You also see men on horses who keep herds of cows. We are in Northern Mongolia. The country of Buryats.
You end the Germans stopped to photograph stuffed bears that are sold on the side of the road. There are also wolves and other furbearers.
They are happy to see you. Bikers group are often closed on themselves. The Germans groups may be more. Certainly much more than the Italian riders. You talk again traveling. They have four weeks off to reach Vladivostok and back by train. A race against the clock. They left on May 31 in Germany. That long days.
You leave and drive together. In the evening, you find a hotel. Things are a bit complicated, but you get the rooms. The landlady knows what she wants. It has her own requirements and wants to be heard, even if you do not understand. Often, women who work in these places are well rude character. Must know how to defend themselves against the customers of any kind that are on the roads.
Further away from Moscow, plus room rates are low. The rooms are perfectly clean today. Hotels in Russia are not alike. There is the best and the worst. Every day a surprise. Russia ignores standards. Rather you enjoy surprises.
You dine together. Photos from previous trips, shared memories of Uzbekistan. You realize they do not have the same relationship with you waitresses, receptionists. They just want a service, and then exchange them in German. You are looking for a smile, a few words. 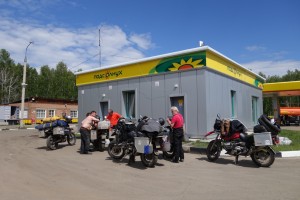 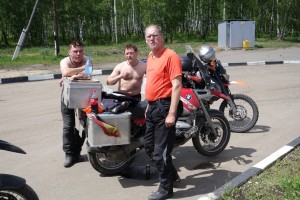 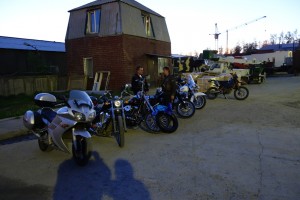 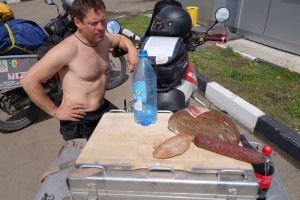 Another long day. Your German friends leave the hotel before you. You need more time to ensure your load. And this morning you wanted to lubricate your chain.
You find them two hours later at a gas station. Suddenly, the distance between two stations had grown, and two of them were out of fuel. They are well organized, and one of them carries a jerry can. However, they were happy to join the station. The farther to the east, more the distance between petrol stations is important. After Ulan Ude must refuel every station you see.
The road is generally good, but with many areas of work. It is often the bridges are under repair, and small workarounds succeed.
Danila who hosted you in Nizli Novgorod gave you the contact information of one of his good friends in Irkutsk: Maxim. You know that he can find you a place to stay. Maxim sent you the GPS coordinates of the place you will meet him. For once you join the site safely. It is 19:30 and you are very tired.
The place is weird. Some houses, sheds .. You call Maxim who does not speak English. One of his friends call you in English. He explains that Maxim will arrive sson, and you’re close to the garage. Indeed, there is a little higher access to garages.
You wait for Maxim almost 2 hours. Every half hour, you call: he will be there soon…You do not understand and you are preparing to go in search of a hotel when you see it happen in a cloud of dust four Harleys. Four black biker jackets. A polished look. They will lead you to the “garage”.