Monday, you sent an invitation to friends, telling them that you would leave Thursday. They arrive, and you have to explain them that it will not be Thursday, but Friday. For the last ten days, you shifted the date by two days every two days. It’s a bit better now because you say “after tomorrow” instead of “tomorrow”. Meaning you get the end of the endless preparations.

You’re happy. Not yet to leave, but to finish this long stage. The “boat mode” now seems functional. For months you worked for this. You spent a lot of efforts. It was difficult to invest you both in this project and in your work. A double life. Since May 1st, you did more than you focus on the journey, and you’re confident.

Your friends ask you: “Where is the bike?” They all expected to see it in the garden, loaded, ready to start. You tell them your delay, the luggage still in the lounge, and the bike still in the garage, not yet fully lift … You just received the shims for your valve clearance this afternoon. And you come with Michel mount a reinforcement kit for the rear frame. You ordered it several weeks but didn’t find the time before for installing it.

Once more, you have postponed by one day the D day.

Today, you cut your side stand and add an outer tube, telescopic, in order to make its height variable. You know that the original version of the side stand would not fit. You remember during your first RTW, you were often looking for the perfect angle to lay the bike. You think that by reducing a little height, its use will be easier .

The weight also makes you worry. Michel has advised you to replace the spring of the shock absorber with a harder. You are trying to find one, but you don’t succeed in this task. Seems to be very special for this bike.

You spent a lot more time than expected to organize the luggages. Some parts of the ship propulsion occupy to much space in the panniers. At the end, you bought a big bag to put your stuff , and you will have also added the lower unit of your mechanics, your tent , your sleeping bag … A bag of 65 liters while you initially thought that a small 25 liters bag would be sufficent. You also placed in the boat the paddles and the bladders for extra gas. All gained weight, overweight. But in the end , everything finds a place, even if you still need half an hour to fill the bag of boat parts. A puzzle.

Youdon’t have time to test your load. You must not go that Saturday . You take advantage of your evening to go for a last via ferrata . You change your mind and relax your back. You have a pinched nerve for the last two days. It is not painful but just annoying.

Martine and Joel are there to photograph you leaving the house, and shut the doors behind you. Leaving the bike in the garden, you feel for the first time the whole weight. There is a year you had driven the boat, but the load was only partial. The difference is huge. You’re not comfortable when riding and especially to turn. This is a surprise. You imagine the weight like a passenger, but it is much worse. 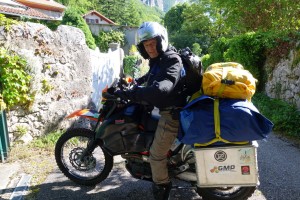 You make an appointment to Joêl to leave the village. You arrive before him, you stations on the lower side and looking for the right place to place the side stand. You descend slowly from the motorcycle. She leans side stand, continues to bend, sag … and revolves around the stand to find the ground. A big blow to morale . You try to raise it, but you can’t. Even without your back pain, it would be too heavy. The weight is too high. This is the first time in your life that you travel without being able to stand up your bike. A strange feeling. A driver stops, goes out his car and helps you to stand up the bike. The bike stays on its side stand, but it looks so unstable.

Joel comes. It takes some pictures. You tell him what just happened. You go, but if it drops three times a day, you will give up and come back in two days.

10am. You leave. Towards Grenoble. You don’t feel comfortable. You take the highway. Just after the entry toll, you stop and take time to analyse the situation. In the parking, avoid the fall.

You cannot go like this. It does not make sense. You look at your stand. You need another one, higher, based further. It could take on the plate that you used to hold the tubes in boat mode. What to do? You think Michel who lives on that side of Grenoble. Maybe he has tubes, perhaps it is equipped to weld ? You call him and Michel asks you to come.

Pascale and Michel did a world tour in a sidecar 5 years ago. Michel is now preparing for a year a new side car, for future trips. He named it Multipass. Supposed to pass everywhere. The side car do not need side stand, and he kept the side stand of the motorcycle, a Ducati.

It seems to be the useable. Michel takes his tools and his super drill. It adds a hole in the plate, and add metal-rubber buffer at the end of the side stand. You have now two stands in parallel. 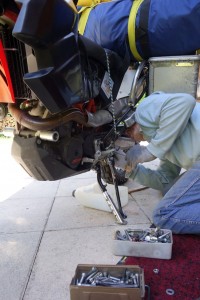 Michel also tunes your shock absorber and lowers your fork tubes up. You will also look to rearrange your load, but there is nothing to do for this…

You’re going for a test-ride . You appreciate the changes. You are no longer afraid to leave the bike on the side stand. A huge progress. And driving is also more enjoyable. The load is always present, but it feels a lot less. You no longer need to place permanently on your weight forward. You find hope and smile …

The day passed quickly. Already 6 pm. The final of the European Rugby Cup will begin. You sit with Michel watching TV. You did not think you would have the opportunity to watch this game. In the evening, a new and beautiful meal. 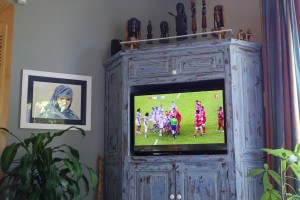 You talk about your respectives travel places that you have found each other. The customs at Apachetta (5000m), the border passings, the mosquitoes, … You spend the night at Pascale and Michel , and will leave tomorrow. But in better conditions.

A Sunday breakfast. Some emails and it’s already 11:00. You feel better than yesterday.

You take the motorway to Strasbourg. A road that you know because you take it every year to go to Nuremberg at an exhibition. At first, you will holds 95 km/h , little by little, you decide to go at 100 .

While the sum of your two tanks is 26 liters, the reserve LED turns on every 190 km. Every time you add 8.5 liters to fill the front tank.

You note the numbers accurately to determine your consumption. Consumption is correct, but you fill uncomfortable you stop for a full after such a short distance . You only filled the tank before , the only available without asking the boat.

For the first day you decide to stop you after 7 pm. You reach Baden Baden. You know a hotel on the highway where you’ve already slept. This is fine. The bike has a garage and you enjoy to go fill both tanks. It remained close to 6 liters and the reserve had just come on, again after 190 km . Probably 2 liters in the rear and 4 in the front. The question is whether you can count on these 4 liters. Without a jerrycan easily accessible, you will struggle to know the answer, but to run out of gas. In any case, you need to fill the rear tank if you want to stay unstressed.

During the night, you resume your old habits of writing. You also prepared the first pictures, but you realize that you forgot to take the information for the FTP connection. Too bad, there will be no photos the first days on the site …