From June 2010 to June 2011, you rode a motorbike around the world. Your first ‘summer road’ was 72000km long as I travelled through Europe, Asia, Australia and the Americas. Your bike was as comfortable on the western graveled roads as it was on the dirt roads of Mongolia and this made it possible for me to go almost anywhere.

Using the bike as transport, provided you with many opportunities to experience the lives of hundreds of people.

From the French Alps, you reached the Russian port of Vladivostok – on the the Pacific Ocean. From there, you took a ferry to South Korea. You travelled by plane from Japan to Australia, from Australia to Argentina, and, to get back to France, from Canada to Spain.

The fact that motorbikes can be shipped over the oceans was a huge advantage. However, shipping requires some organization like finding an international airport, putting the bike into a crate, and, leaving the bike at a transit company. Shipping also requires a lot of money. These constraints make the bikers reliant on sea-airline companies as well as impede their freedom and independence. Oceans are their borders and they present some frustrating limitations. You wish now to workaround these limitations. 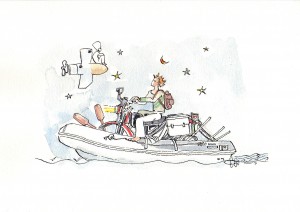